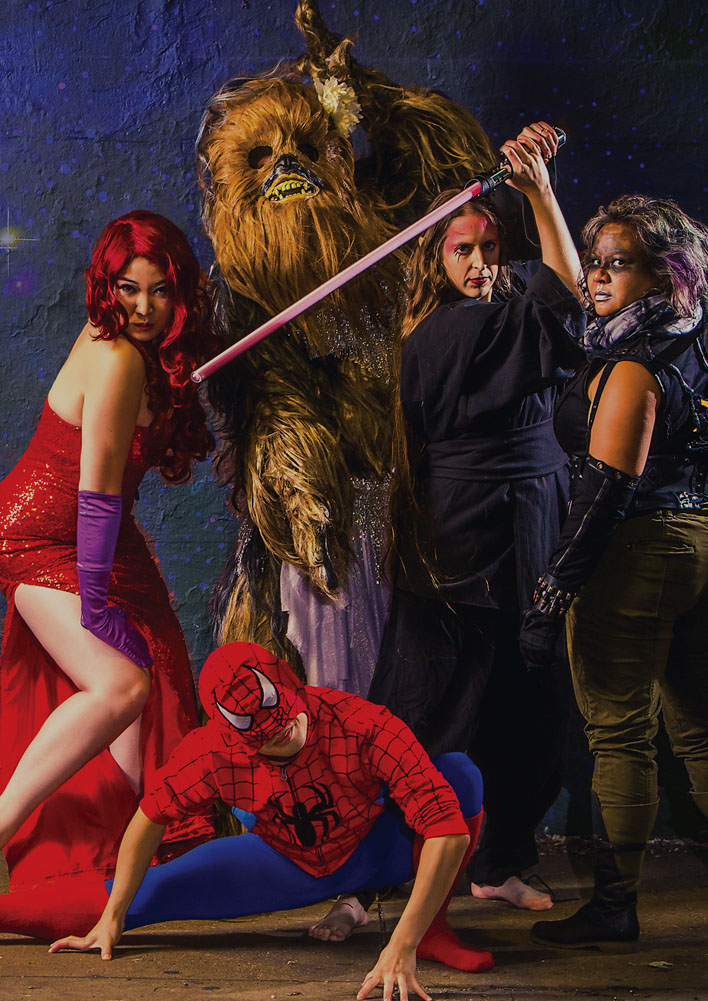 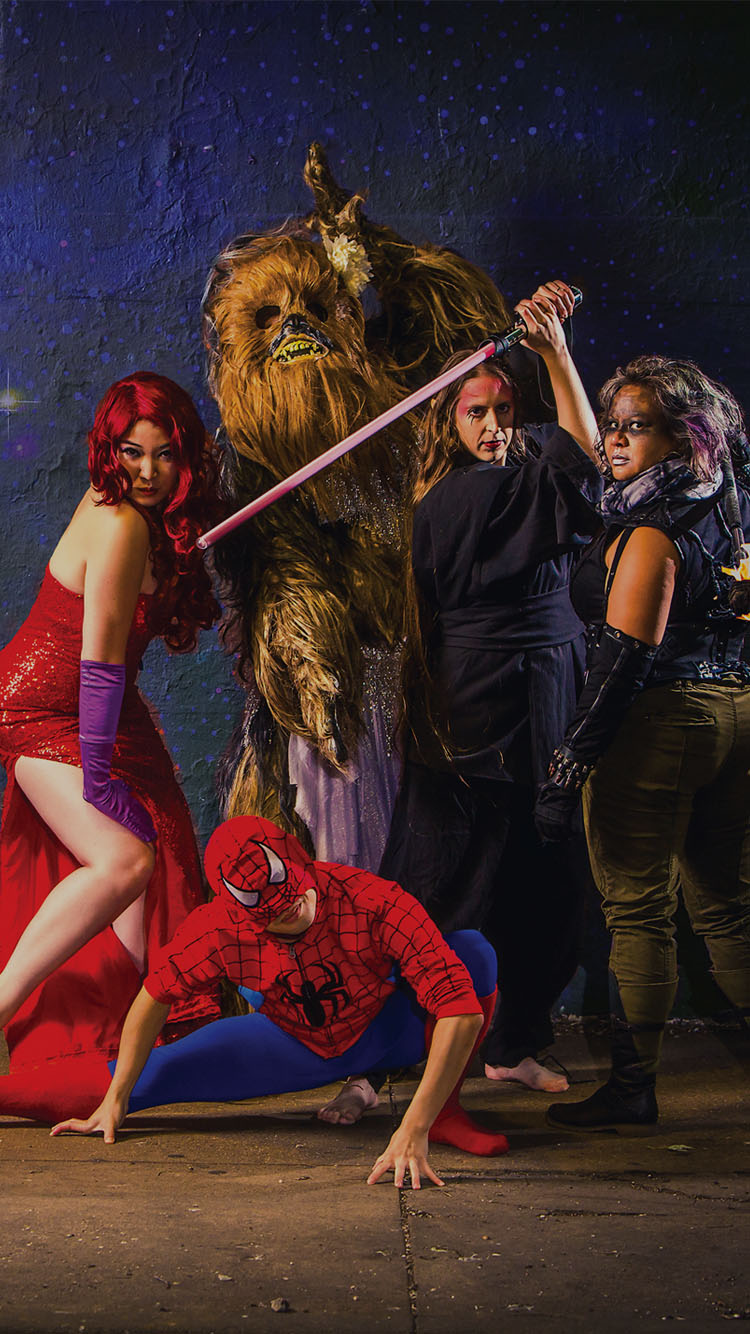 Raks Geek is the premiere bellydance, flow arts, and fire company by geeks for geeks. We're based in Chicago, Illinois, but we've made waves nationally and internationally on MSN, WGN-TV, The Daily Mail, WCIU, and the Chicago Tribune through our commitment to blend a high degree of artistic and technical mastery with fun, creativity, and our favorite themes from nerd culture. Our dancers and firespinners have performed everywhere from Germany to Argentina and dance for hundreds of people every week, but they're also lifelong geeks who bring a love and expertise in science fiction, video games, technology, research science, and comics. We were featured on UK Channel 4 TV's "50 Funniest Moments of the Year" and listed as a Timeout Chicago Critics' Pick.

Also: The internet loves us. And we love the internet.

All in-person live shows have been postponed due to COVID-19. Please join us online instead! 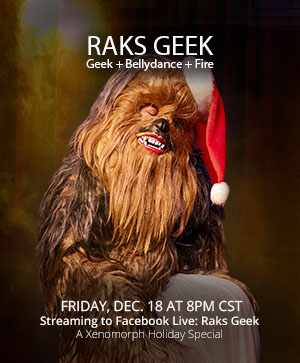 Our chests are bursting with cheer! Say goodbye (and good riddance) to 2020 with chest-bursters and Wookiees in Santa hats!

Hang with the bellydancing Wookiee, firespinning superheroes, and sword-wielding villains for a livestream version of our stage show! We'll pay tribute to everything from the X-Men to Star Wars, Doctor Who to Silent Hill, Super Mario Bros to Sandman. It's a veritable cornucopia of nerdy delights.

A portion of donations will go to My Block, My Hood, My City, a BIPOC-led organization serving underprivileged youth in Chicago. 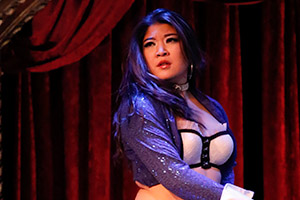 After years of teaching swing dancing, a YouTube video prompted Dawn Xiana Moon to reinvent herself as a tribal bellydancer. She studied with Stephanie Barto of Read My Hips and soon after was invited to join the troupe, performing 100 shows a year at venues like the Chicago Field Museum and Alhambra Palace for almost a decade; she's trained extensively with Kami Liddle and other teachers all over the country. She was recently named Chicago's "Best Dancer" and "Best Stage Performer" by the Chicago Reader. The Singapore-born geek has given talks at The University of Chicago, C2E2, Wizard World Chicago Comic Con, Michigan State University, and more, and regularly out-nerds even computer science professors. She is also a singer-songwriter that has toured through 10 states; her latest album features folk/pop with influences from jazz and traditional Chinese music. (She was also runner-up for Chicago's "Best Singer-Songwriter" and nominated "Best World Music Act" this year.) Dawn is also a UX designer and web developer with clients including the University of Chicago Booth School of Business and Anheuser-Busch (like this site? She made it). Conversations with her may cover the following topics: the differences between the Lord of the Rings films and books, Shakespeare, who would win in a fight between the Daleks and the Borg, how decades of Star Wars lore were destroyed in a single moment of the prequels, and the importance of good art. 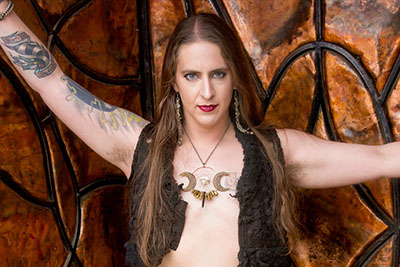 Research scientist by day, bellydancer by night, Kamrah is basically a superhero. Oh, and they can kick your butt too: They have 13 years of experience in a variety of martial arts, won third place at Tae Kwon Do World Championships (White Belt), and studied kung fu with Lou Illar (Sidekicks with Chuck Norris). As a bellydancer, Kamrah has been performing traditional, cabaret, and tribal fusion since 2001; they currently perform throughout the country as a soloist at places like Chicago's Double Door and were featured on NBC. Kamrah has taught at Tribal Fest in Sebastopol, CA, the largest tribal bellydance festival in the world, Tribal Revolution, Bayou Belly, and Tempest's Waking Persephone (Seattle). Kamrah has also danced with Tucson-based Skirt Full of Fire, directed by Jolie Roberson, and Xanadu Dancers (Phoenix, AZ). Their love of science fiction, fantasy, and comic books is well known, but lesser known is the fact that they an Alien tattoo. And a virus tattoo. And Rebel Alliance and Imperial tattoos. Up for a challenge? When Kamrah's not kicking literal butt, they kick figurative butt in Star Wars Trivial Pursuit and Final Fantasy. You've been warned. 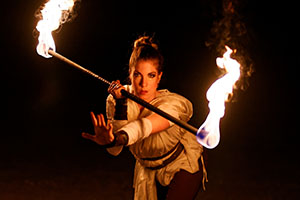 Gaea Lady has been moving in mysterious ways since she was three years old. An enchantress by nature, she sees her body as her instrument to express herself. Studying classical forms to start her career, her attention soon went the way of the ethereal, including fire, hoops and hypnotizing fabrics. Dabbling amid any form she can get her toes on, her style borrows from the graceful and energetic mix of all she’s studied in the past. Ranked internationally as #35 in the “Most Influential Burlesque Artists of 2018,” Gaea has performed all over the country, notably at the Burlesque Hall of Fame 2016 where she won “Best Debut” and “Most Classic.” Gaea geeks out about food, Star Wars, and the metaphors and stories of all things sci-fi between rehearsals and shows. Being Leia has been a dream of hers ever since she first saw Episode IV at the age of five. 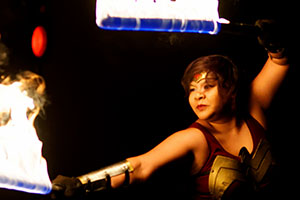 Michi Trota is a firespinning geek fiend who was raised on a steady diet of 80s cartoons, anime, and sci-fi/fantasy literature and soundtracks. She has a Simpsons quote for every occasion, always bags and boards her comics, and refuses to acknowledge the existence of a fourth Indiana Jones movie. Discussions about geek culture, feminism and intersectionality are guaranteed to get her talking for hours - she organizes panels at C2E2 and Chicago Comic Con and speaks at universities. She's a former board member of the Chicago Full Moon Jams and president of the Chicago Nerd Social Club, and blogs about geekery, food, fire and anything else that catches her fancy at The Geek Melange. She is also the Managing Editor of the multiple Hugo Award-winning Uncanny Magazine. 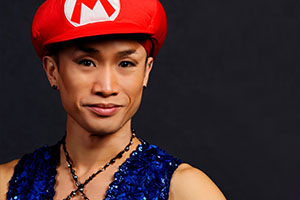 Internationally known, Lee Na-Moo combines bellydance with contemporary dance, ballet, jazz, hip-hop, and several Asian styles. He won the 2010 Chicago Oriental Dance Competition, which brought him to audiences in Argentina, and was invited to teach and perform at the 7th International Oriental Festival in Spain. He has also toured with Bellydance Evolution in Morocco, Germany, and the Czech Republic as a teacher and performer and was nominated by the Chicago Reader as "Best Choreographer" this year. Lee was a longtime member of Read My Hips and is currently a member of Joel Hall Dancers, a contemporary dance company based in Chicago. He is also an avid video gamer and a lover of all things geek.

Never seen a sexy Wookiee bellydance? This can be remedied.

All in-person live shows have been postponed due to COVID-19. Please join us online instead!

Our chests are bursting with cheer! Say goodbye (and good riddance) to 2020 with chest-bursters and Wookiees in Santa hats!

Hang with the bellydancing Wookiee, firespinning superheroes, and sword-wielding villains for a livestream version of our stage show! We'll pay tribute to everything from the X-Men to Star Wars, Doctor Who to Silent Hill, Super Mario Bros to Sandman. It's a veritable cornucopia of nerdy delights.

A portion of donations will go to My Block, My Hood, My City, a BIPOC-led organization serving underprivileged youth in Chicago.