"This is exactly how you wanted to see a Wookiee your entire life!"

"This group of world-class bellydancers differentiates themselves from the crowd with a geeky shtick that covers fandoms from Trek to Dr. Who and Portal. And again, they’re amazingly talented."

"Lifelong geeks who bring a love and expertise in science fiction, technology, research science, and comics."

"The coolest dance company on Earth."

"There is no show in Chicago I can recommend more."

"The performers blend artistic and technical mastery with their favorite themes from nerd culture, resulting in performances that are mesmerizing to watch and a joy to behold. "

"Don't hesitate to see this show!"

"These aren’t just some cosplayers that thought they could dance. No. Raks Geek is a group of professionals who have performed all over the world, from Spain to Argentina. Their members have won awards from all over. They perform hundreds of shows every year and have been featured on MSN, The Daily Mail, and UK Channel 4."

"Imagine all your favorite geekery blended with fire spinning and belly dance. Yes, it’s a sight to behold.

"If you ever wanted to see a bellydancing Wookiee, this is where you look."

Incredible cast of talent... These performers bring our kind of fandom alive... 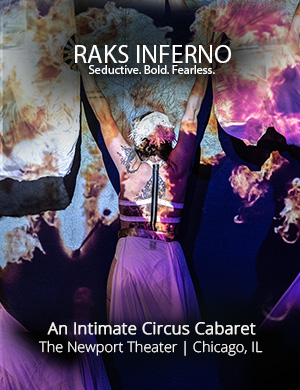 "When sexy meets dangerous, it’s badass.” Join Raks Inferno for unique shows every month featuring firespinners, bellydancers, and object manipulators who have performed around the world, dazzling and inspiring audiences from Germany to Morocco, Costa Rica to the Czech Republic! We won't nerd out this show, but we will amaze you with badass bellydance and fire!

Superstition: Enter a space of mystery, where myth and magic reign. 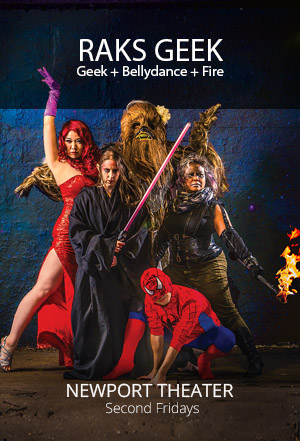 Join the rebellion: Aim to misbehave.

Hang with the bellydancing Wookiee, firespinning superheroes, and sword-wielding villains for a brand-new production of fire, nerdery, and wonder every other month - we'll pay tribute to everything from the X-Men to Star Wars, Doctor Who to Silent Hill, Super Mario Bros to Sandman. It's a veritable cornucopia of nerdy delights. (But not the kind you have to fight to the death for.)

So grab a Romulan Ale, help raise money for local non-profit orgs, and geek out - don't miss one of the most unique experiences in the Alpha Quadrant! 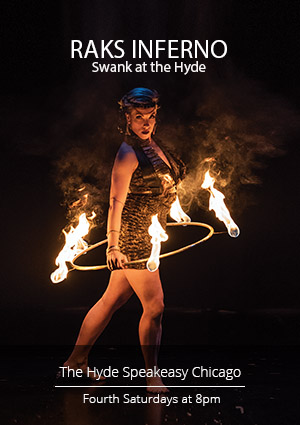 Swank at The Hyde

Enjoy craft cocktails in a lush south side speakeasy and popup performances every half hour from firespinners, bellydancers, and object manipulators who have appeared on NBC, MSN, and more. "When sexy meets dangerous, it’s badass.”